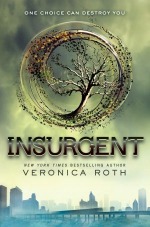 As many of you know, I reviewed “Divergent”- the first book in the same-named trilogy a little while ago and love it. So you can imagine the expectations I had for “Insurgent”. Sadly- they weren’t really met. 16-year-old Tris spends most of the novel in a deeply depressed state (understandable since she shot and killed one of her closest friends and watched her parents die), seemingly trying to find ways to kill herself without actually doing the deed herself (walking into the hands of the enemy, for example, or entering a fire fight without a gun).

Tris finds herself questioning the loyalties of everyone around her- Caleb and Four included- and what it really means to be Divergent. She also finds herself starting to question what her old faction was truly targeted for after discovering that it was on the brink of releasing vital information to the entire population. And even questions about her own family and what secrets her parents took to their graves.

However- not all I have to say about “Insurgent” is bad. It acted as a nice filler for the story and did a wonderful job of setting up the third and final novel. “Insurgent” also felt more like a true dystopic novel than “Divergent” did as we learned more about the reasoning behind the creation of the new society and the factions. I would tell you to read this book, especially if you’ve read the first, but don’t get your hopes up too high over it- leave that until the end when it sets up the third novel.