A fiction pick by Jean-Louis 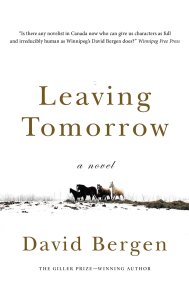 David Bergen is a Manitoba writer who has won the Giller Prize and been considered for just about every major literary award in the country. His writing voice is clear and assured and in his new novel, “Leaving Tomorrow” he once again creates a strong central character who takes us along on his journey.

In literary speak, what Bergen has written this time is a bildungsroman–essentially a writer’s coming-of-age story. We start off the novel with Arthur describing his own birth on a ship off the west coast of Canada. His entry into the world is dramatic and announces an intellect which will continue to dominate the narrative throughout the novel.

Like the novelist, young Arthur grows up in a Mennonite home (now moved to the ranch lands of southern Alberta) and is informed by ranch life and a strict moral code. Bronc busting, cattle droving, fence mending, and religious education are at the base of Arthur’s life. But so too is a desire to move beyond that existence–young Arthur knows there is more to be discovered. A traumatic accident causes young Arthur to experience a prolonged period in bed and here, with the assistance of  an enabling librarian [you have to love them] our hero starts to learn about the charms of French literature and the worlds beyond the ranch borders.

Arthur’s story is full of loves and losses, adventures and disappointments, travel and return. Bergen has created a rollicking good story that any reader can latch onto, whether he/she grew up in the hard western plains or only wishes he/she had. Check out “Leaving Tomorrow” today.