And the birds rained down by Jocelyne Saucier 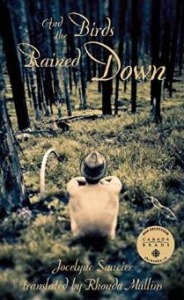 It’s a rather a depressing novel. Sometimes I wonder how certain books rise to win awards while others, though excellent, fail to do so. Saucier’s book, of course, was one of the finalists in this years CBC Canada Reads selections.

Several elements in the story gnaw away and remind of how life slips away so quickly and often ends badly.

Two old guys Tom and Charlie (and until recently Ted) set on finishing their lives in the forest. On the surface, dying in the woods has a certain appeal. Nature brings us closer to the mysteries of the universe, as does death. Grappling with death is never easy, however suicide often makes it all the worse.

A female photographer searches for survivors from a terrible fire that once decimated a number of communities killing many.

There is the story of another older female who spent the bulk of her life in a psychiatric institution but this only by unusual circumstance not legitimate need.

A closer look at Ted’s (recently deceased) abode reveals hundreds of paintings most all of which depict the tragedy of the fire that the photographer seeks to investigate. The horror and grief of the event apparently etched in his mind and carried with him to his death.

Then there is the museum curator – Miss Sullivan, a custodian of heartbreak. A tale in itself.

All in all, not the most encouraging book, but perhaps a picture of reality that we all must contend with.